Native to Northern California, Jimmy Grant grew up in a household full of rich musical influences. While his early influences also included Russian Folk, Balkan, traditional Hungarian, Bluegrass, Celtic and Classical, from a young age he gravitated towards the music of Django Reinhardt.

He plays a blend of music from all over the world and his own compositions. He has studied with acclaimed guitarists Jim Nichols and Howard Alden, and in addition to Django Reinhardt, his other major musical influences are Sandu Ciorba, Bach, Kovacs Andor, Roby Lakatos and Angelo Debarre.

Jimmy has recorded two albums under his own name, and performed on several other albums. His original song “Insomnia” was a finalist in the John Lennon songwriting competition (jazz category). As Jimmy puts it:

“We believe that jazz, and the music of Django, is a piece of history worth preserving.”

In addition to performing, Jimmy teaches private students and has been on the faculty of the Django in June Festival in Massachusetts, and also is the artistic director of the Django Reinhardt Association. Jimmy also writes for “Gypsy Jazz Secrets Magazine.” He has been featured in Relix magazine and Acoustic Guitar magazine.

1) What are you favourite albums?

Aside from ALL Django(!)

This is one of my favourite albums for many reasons, most of all the selection of tunes and the arrangements. It’s a blend of gypsy music, swing music, and musette. I find the soloing not harmonically complex, but virtuostic and melodic to the point you get the solos stuck in your head as if they are melodies.

This record was a gateway to many other musics for, as it features songs from many different regions of Europe. The arrangements are bizarre & melancholy. Every song feels as if you have heard it before. I love listening to this record on a good set of speakers, or with a good set of head phones.

Baro Ferret was considered the 2nd greatest guitarist in Europe (after Django), but there are very few examples of his music. This record is one of the few glimpses into his world. The entire record is musette tunes reinvented with chaotic arrangements; not the “traditional” hot club format of 3 guitars, bass and violin. This record is a reminder that you don’t have to follow the traditional rules.

Reach out to a “master” and take lessons if possible, even if they are only coming through town briefly. Also LISTEN to lots of recordings – most specifically Django, as most other guitarist in the genre are just stealing his lines…

4) Who are your top 3 gypsy jazz guitar legends? 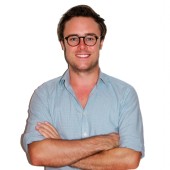